Being Flecking Records favourites, it was only natural we caught up with All Time Low as they hit the roads of America and Canada on the Bamboozle Roadshow 2010. We met up with Rian Dawson and Jack Barakat, and a surprise guest (Alex Gaskarth) gatecrashed the interview in Toronto, Canada.

For those who might not know you, introduce yourselves!
Rian: Sure! I’m Rian, and I play drums in the band and do occasional back up vocals.
Jack: I’m Jack and I sing and play guitar for All Time Low.
Rian: In that order.

So how has the Bamboozle roadshow been going so far?
Jack: It’s been an amazing tour and quite an experience.
Rian: Kind of like a dream come true for us. A lot of our first inspirational bands like Good Charlotte and Third Eye Blind are on this tour, so it’s been cool to hang with them. Dancing with them and singing with them.

What is the most Rock ‘n’ roll thing you have done on this tour? We heard about your mace incident in Texas.
Rian: Yeah, our fans got maced, that’s always been a goal of ours.
Jack: That’s very rock ‘n’ roll I’d say. It would have been more rock ‘n’ roll if we had maced them ourselves.
Rian: It sucked, because we had nothing to do with it really.
Jack: But it’s still a cool story, it’s still rock ‘n’ roll.
Rian: Yeah I guess it is.

Which bands do you enjoy watching the most on this tour? Do you get to watch a lot of bands?
Jack: There’s nothing much to do because we always get stuck in the middle of nowhere.
[Jack looks out of the window over the industrial streets of Toronto.]
So we get to watch all of the bands every day, that’s basically all we do.
Rian: It’s kinda cool. There are two stages, the main stage which has Good Charlotte, Third Eye Blind, Boys Like Girls, so the more lucky bands as it were, and then the side stage has more newer bands who we get to make friends with and hang out with.
Jack: Yeah, they’re bands like Stereo Skyline and Mercy Mercedes.
Rian: So literally all we do is jump on the side of the stage and watch all these bands, and like I said you know we get to watch Good Charlotte, Third Eye Blind, and some of our best friends Boys Like Girls, so it’s been a really good time for us.

If you could host your own festival, who would headline and who would support?
Rian: Pretty much just this tour.
Jack: Plus Blink-182 and Green Day.
Rian: Oh, and maybe Jimmy Eat World!
Jack: Blink-182, Green Day, Jimmy Eat World,
Rian: And Good Charlotte and Boys Like Girls. As for us, we would just open everyday so that we could just spend the rest of the day watching all the bands.
Jack: Weezer!
Rian: Ooh! Drake, Phish!

Who are Phish?
Rian: You never heard of Phish huh? Did you ever smoke marijuana?
No comment.
Rian: Well, they like invented marijuana! 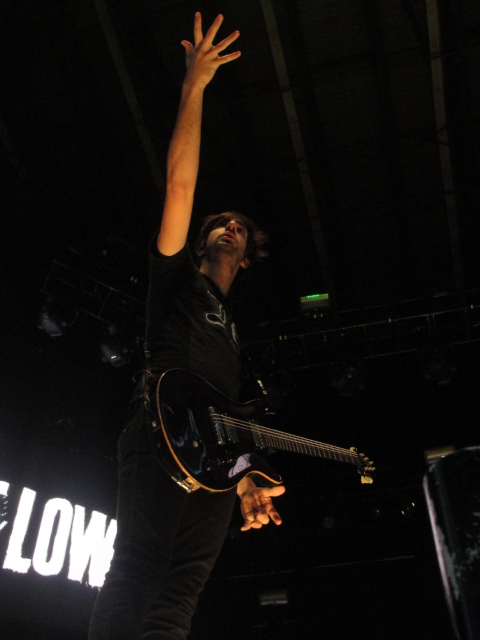 Do you prefer playing huge venues like this one tonight, or do you prefer the smaller intimate shows?
Jack: Well there are probably the same amount of people here that would be at a smaller show anyway.
Rian: Last night we played at a venue just outside of Detroit and the venue was proper for the amount of people. But then there are times when the size of the venue is just not necessary and I think tonight is one of them. Actually this whole tour has kind of been like that. [laughs] But I mean, we didn’t book it, we just play.
Jack: Yeah, we are not Blink-182!
Rian: But it’s still cool. I mean there is definitely a better vibe when it’s more intimate and a venue is more packed out.

Well at least you got this nice dressing room!
Rian: Yeah that’s a good part! We got a nice room.
Jack: But we have no food. We got given four Doctor Peppers and like six waters.
Rian: Yeah that’s our rider for today.
Jack: That’s just what they had left over from the last people that were here.

So you’re always on the road, how do you cope with being away from friends and family?
Jack: Picture messages!
Rian: A lot of picture messages! We’ve been touring since we graduated high school, so it’s kind of been a gradual process. At first we weren’t touring that much, and then all of a sudden it just snowballed, so you just tend to learn to deal with it.
Jack: Sometimes our friends come out and meet us in certain cities and stuff.
Rian: Yeah same with family, my Mum comes to Vegas a lot.
Jack: What was she doing in Vegas?
Rian: I dunno, I wondered what she was doing in Vegas, maybe she works there.
Jack: She works there?
Rian: So yeah, it’s just something you have to do, it’s part of the job. Probably the worst part of it, except for interviews [laughs].
Jack: Actually, I kinda like it. You say it’s hard being away, but I like to get away from people in Maryland who I don’t wanna be around. I mean there’s my friends and my family, then there’s people I get to leave and be like “peace bitch”.

Let’s play word association!
Music.
Jack: Blink!
Rian: Ah that was actually gonna be mine too.

Feed The Pony. [In our last interview, we taught Jack and Alex English slang – including ‘feed the pony’. Rian was not present.]
Jack: I LOVE feeding the pony!
Rian: Quesadilla! What does feed the pony mean? Is it a sexual euphemism?

Is there anyone you would like to collaborate with? 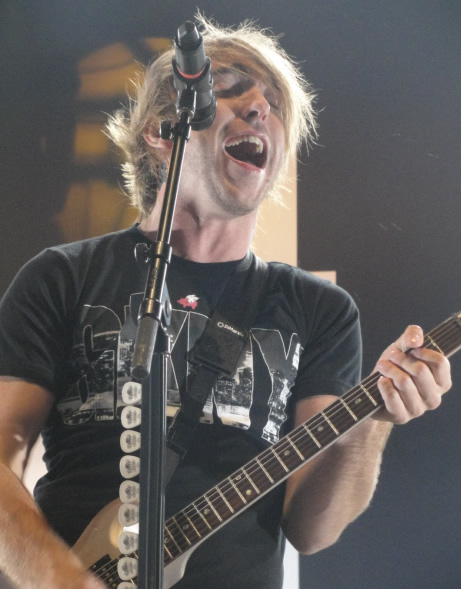 Rian: Erm, this would be a question probably better for Alex.
Jack: Yeah.
[Alex just so happens to be peeping round the doorway.]
Rian: Alex, who do you want to collaborate with?
Alex: Your butt.
Rian: My butt? No seriously, who?
Alex: Dave Grohl!
Rian: Oh yeah, that’s a good one. Dave Grohl. Kurt Cobain, John Lennon.
Alex: John Legend [laughs].
Rian: Alex looks good today, I was expecting him to be puking everywhere. We had to wake up at 4.30 for the border crossing, we were all too tired to get up and Alex was just wasted watching some weird movie with our light guy Jeff.

So who is the most embarrassing band or artist you’ve got on your iPod?
Jack: Probably Hilary Duff.
Rian: I only know one song by her.
Jack: I have her entire collection.
Rian: Eiffel 65.

Are there any songs you would love to cover?
Rian: Now that you mention it, I would love to do a Foo Fighters cover, but Dave Grohl won’t let us do it. He doesn’t like the way Alex’s voice sounds. I’m just joking, I’d love to cover “Learn to Fly”.
Jack: I’d like to cover “Hey Jude” by The Beatles.
[Alex walks back in.]
Alex: It’s Hey June.
Jack: Hey Jew?
Rian: Isn’t it Hey Jude?
Yes it definitely is Hey Jude.
Alex: June, it’s June.
No it is 100%, Hey Jude.
Alex: OK [pauses]. It’s Hey June.
Rian: OK, agree to disagree.
Alex: June.

So how do your USA/Canadian fans compare to the UK fans?
Rian: Spoilt.
Alex: Yeah.
Rian: We tour the USA all over like three times a year, and the UK is sometimes only like once a year, so we find when we go over to the UK they’re willing to give it their all. Whereas USA fans sometimes just stand there singing instead of moving around and dancing.
Jack: It’s still awesome.
Rian: Yeah, it’s still awesome but when you go to the UK you just know they’re thirsty for it. I am excited to go back there, for Reading and Leeds Festivals. 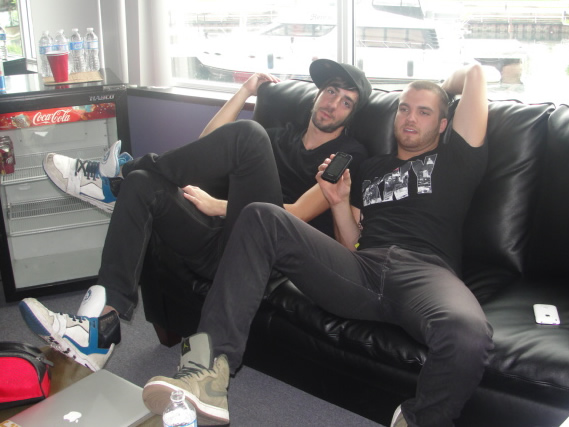 What advice would you give to new bands trying to make it in the industry?
Jack: Suck as much…
Rian: Quit!
Jack: Suck as much “quit” as you can.
Alex: Meet everyone you can, play all the shitty shows that you can.
Jack: M-E-A-T everyone.
Rian: Play all the shit shows, play all the one-person-there shows and don’t complain
Jack: And go down on every single record executive.
Rian: That’s a big one
Jack: We went down on [name removed] at least five times each.
Alex: Errgh!
Rian: But then we got signed to Drive-Thru, so we still made it.

Yes you did! So to whoever [name removed] is, fuck him, it’s his loss!
Jack: For the record, we didn’t say that, Flecking did.
Rian: Yeah.
Alex: But on the record… fuck him [laughs].
Rian: Last time we saw him was in Vegas actually.
Jack: He was working with your mum.
[laughter]

What is next for All Time Low?
Rian: We finish up this tour at the end of June, so then we should be finishing up the record, unless Alex shits the bed and goes crazy like lead singers do, lock themselves in a room. So we finish the record in July, we go overseas for August and September and we’ll be back in the USA maybe slash Canada, I dunno. [to Jack] Do you know?
Jack: I dunno.
Rian: [to Alex] Do you know?
Alex: I dunno.
Rian: I dunno, maybe we’ll find out.
Jack: As well as Reading and Leeds we have some other festivals in Europe with Blink-182! And then we’re hoping the album will be out early next year.
Rian: Yeah early 2011. Wow, 2011. We’re all gonna die soon.

Have you seen the film 2012?
Rian: No I haven’t actually.
Alex: It’s all bullshit.
Jack: John Cusack, I like John Cusack.

Who is going to win the world cup?
Alex: Spain.
Rian: Spain lost today to Switzerland.
Alex: Did they really? Spain!
Rian: [After some advice from roadies] Brazil! Brazil or USA.
Jack: Yeah, I’d say Germany.
Rian: Hows your goalkeeper [Robert Green] doing?
No Comment.
Rian: Isn’t he really good normally?
We prefer David Seaman. Why are you laughing Rian?
Rian: His last name is semen. He comes out of a pee pee when it’s not pee.